OVERVIEW: Few clubs in all of minor league baseball – and not just independent baseball – do things quite like the St. Paul Saints do.

In one of baseball’s better cities and one the game’s state-of-the-art ballparks, any trip to visit the Saints is a treat each year.

Nobody can quite put a finger on it, whether it’s the 8,000-plus folks that pack CHS Field each night, the wacky and engaging promotions each year or just the atmosphere around the ballpark each and every game. Whatever the Saints do, it seems to work.

St. Paul isn’t too far away from Lincoln, either. And if you can only make one trip this year (or any year, for that matter), this is one to hit.

THE STADIUM: When the Saints moved from classic Midway Stadium into the palace that is CHS Field, there was some concern about the club’s unique environment translating to a more corporate setting.

That, of course, would up being anything but the case.

CHS Field feels like a Triple-A facility. It’s massive, and there are plenty of seats stretching down the left- and right-field lines, but there’s also a significant second deck pack with a high-end luxury club and many luxury suites to choose from.

The sightlines of the ballpark are excellent and the outfield offers fans plenty of ways to stand (and sometimes sit) to watch the Saints play. The sheer size of the ballpark makes it feel like big-time baseball, and with St. Paul packing in at least 8,000 fans per night, it’s a tough place to top.

Even more, the park is nestled right into downtown St. Paul, which only adds to the atmosphere and environment inside each and every night. 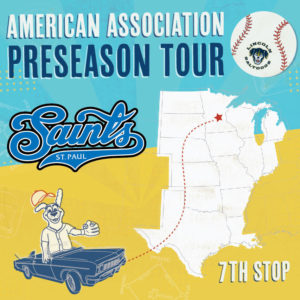 THE CITY: Even though the Saints don’t play in the league’s largest metro area, it’s always felt like the team had the best and most unique identity for the big-market clubs in the American Association.

Downtown St. Paul offers so many great eateries and bars that it’s the last thing you’ll have to worry about when booking a trip to CHS Field. No matter where you want to eat during the day, or where you want to find a drink after the game, St. Paul has you covered.

And even if you’re only a 20-minute drive from the heart of Minneapolis, St. Paul’s history is enough for you to spend multiple days in and around the city to discover everything it offers.

With St. Paul being the capital of Minnesota, obviously a visit to the Minnesota State Capitol is well worth anyone’s time – but the iconic Saint Paul Cathedral sits atop a hill overlooking downtown and dominates the landscape any which way you choose to approach the city. While you can appreciate the architecture from afar, a trip to the cathedral is worthwhile, too.

For those looking to enrich their knowledge of history, the James J. Hill house (built by railroad tycoon James J. Hill in the late 1800s) is one of St. Paul’s unique treasures, and for anyone who wants to get out and about (and away from the city center), Como Park has something for everybody – including a conservatory, an outdoor, lake-front music pavilion and the Como Golf Course.

Again, there’s something for anyone and everyone in St. Paul. We can hardly scratch the surface during the Preseason Tour.

WHEN THE ‘DOGS ROLL THROUGH ST. PAUL: July 1-3. Tickets range anywhere from $5-$130 and can be purchased online.