OVERVIEW: Most of the cities we visit are either right down the Midwest or up a little further north – but there are a pair of cities in the league from the Lone Star State, including the smallest community in the American Association.

While Cleburne is small, it’s not too far away from the Dallas/Fort Worth Metroplex, and it’s very easy to spend a day or two in the big city and have plenty of time to get back down to The Depot for an evening of baseball.

Thanks to a brand-new express toll road, it’s easy (albeit a little expensive) to get around with ease, and, of course, it’s Texas. There’s so much to see and so much to do.

Whether you’re looking for a quiet night in a rural Texas town, or hoping to explore the hustle and bustle of a major U.S. city, Cleburne’s the place for you.

THE STADIUM: The stadium itself is the smallest in the American Association, and it isn’t really close. There are only 11 sections and maybe 10-12 rows of seats per section. But it’s that close proximity to the field that gives The Depot one of the more intimate atmospheres in all of baseball.

There’s plenty to explore within the confines of the stadium, including a spacious and luxurious Conductor’s Club on the second level (made up entirely of the Club, suites and the press box) which offers a unique perspective higher up, but also very close to the playing surface. The Conductor’s Club has a full-service bar, plenty of tables and lounge areas, and a comfortable patio deck that can catch Texas’s summertime breeze and provide a cool way to watch the game.

The stadium also has a large bar located down the left-field line for those who want to spend some time with a little more space to breathe. The bar offers seats and tables to enjoy the game from, but is also right in the line of foul balls – so bring a glove!

Each side of the ballpark offers a healthy amount of berm seating, and the First Financial Bank Picnic Plaza is a family-friendly area down the right-field line.

If you want to stretch the legs a little and walk around, the stadium also features a Cleburne baseball museum, and you can learn all about how the old Cleburne Railroaders of 1906 eventually became … the Houston Astros! (We won’t spoil the story for you.) 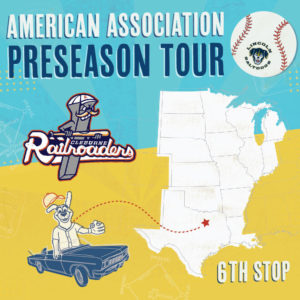 THE CITY: Cleburne itself is a small Texas town. It revolves around the quaint downtown/courthouse area and also features a few things to do spinning off the highway that runs right through the middle of it.

One of the nearby attractions is Dinosaur Valley State Park in Glen Rose, TX, which offers individuals and families alike to observe old dinosaur tracks and take in the beauty of Northeast Texas.

The ballpark, however, is a 25-minute toll ride jaunt from the heart of Fort Worth, Texas. This means vibrant nightlife, plenty of Cowtown character and one of Texas’s most unique tourist attractions – the Fort Worth Stockyards. (For those who remember the Fort Worth Cats, old LaGrave Field – despite its disrepair – is located essentially right in the middle of all of this.)

Fort Worth isn’t too terribly far from Arlington, which offers plenty of family-friendly amusement parks, atour of world-famous AT&T Stadium and also a chance to see a Texas Rangers game in the final year of Globe Life Park’s existence.

A little further is downtown Dallas, and though it’s a bit of a haul from The Depot, Dallas offers that much more to do during a trip to Texas.

If you end up going and are worried about what you’ll do in the interim, don’t be. It’s a fantastic location to visit.

‘DOGS ALL-TIME RECORD IN CLEBURNE: Although the ‘Dogs have owned the all-time series at home, they’re just 6-7 in two seasons of games at The Depot.